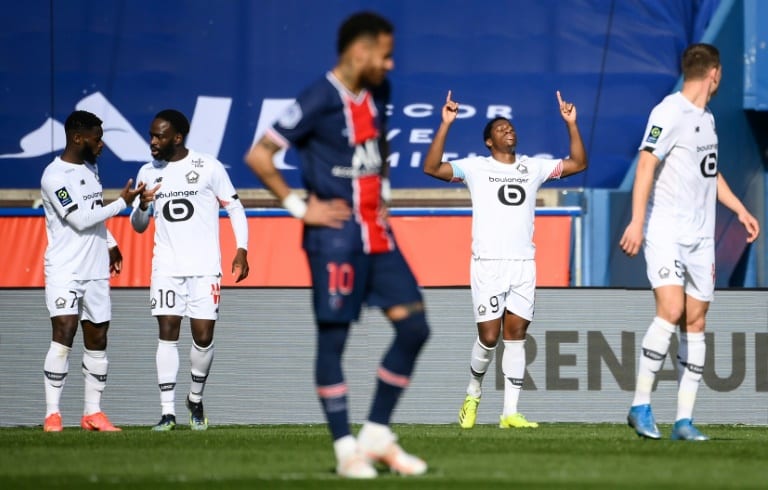 Paris (AFP) – Paris Saint-Germain have claimed statement wins in Barcelona and Munich in the Champions League while leaving the door unlocked at home, giving Lille the chance of a first Ligue 1 title in a decade.

PSG have lost eight times this season, while Monaco and Lyon are also within five points of Lille. It is an unpredictable title race, and the fact only the the top three qualify for next season’s Champions League adds spice.

Lille’s operating budget is understood to be around a quarter of PSG’s, but shrewd buying and selling has taken them to where they are, along with an outstanding coach in Christophe Galtier.

After finishing second to PSG in 2019 they sold Nicolas Pepe to Arsenal for a reported 80 million euros ($87m).

In the last Ligue 1 season, curtailed due to the pandemic, they came fourth and then sold top scorer Victor Osimhen to Napoli for an initial 70 million euros.

Plenty more have left, but the knowledge of Luis Campos, a Portuguese super-scout who helped build Monaco’s title-winning team of 2017, allowed Lille to keep re-generating.

Three starters against PSG — goalkeeper Mike Maignan, Boubakary Soumare and Jonathan Ikone — all left Paris for Lille in search of first-team football. Another ex-PSG youngster, Timothy Weah, did likewise and came off the bench for Lille in that game.

Lille have invested elsewhere though, including 27 million euros to sign Canadian striker Jonathan David from Gent — he scored the winner in Paris.

“This season, more than the last two, we have been very strong collectively despite having a bit less individual talent than the other three teams fighting for the title. Without that we wouldn’t be able to compete,” Galtier, in charge since late 2017, told AFP.

Previously successful at Saint-Etienne, Galtier has kept Lille on course despite off-pitch turbulence.

In December the club was sold to Callisto, a subsidiary of the Merlyn Partners investment fund. Campos departed, while a new president was appointed.

Galtier feels this season has been his “biggest challenge”.

“We need to keep going and give ourselves the best possible chance while understanding we might not end up being champions and we might not even qualify for the Champions League. The key is to have no regrets,” he said.

The 54-year-old, once the assistant manager at Portsmouth, could go at the season’s end too and has been linked with Lyon and Nice.

However, he says he is entirely focused on delivering success to Lille, who face Metz this weekend.

“I am really happy here, but I don’t think I will stay for seven or eight years like I did at Saint-Etienne.”

Could he return to England?

“Four or five years ago I wanted to go abroad, less so now. If I did, I have always said the English league would be the dream. Their league has become the best in the world. There is so much passion!”

Volland has been a revelation for Monaco since signing from Bayer Leverkusen, and you have to wonder why Joachim Loew continues to leave him in the wilderness from the Germany team.

The 28-year-old, last capped by his country in 2016, is one of the main reasons Monaco are title contenders, having scored 14 Ligue 1 goals. Monaco have lost just once in 16 games.