Leipzig knock Bayern from top after romp at Freiburg 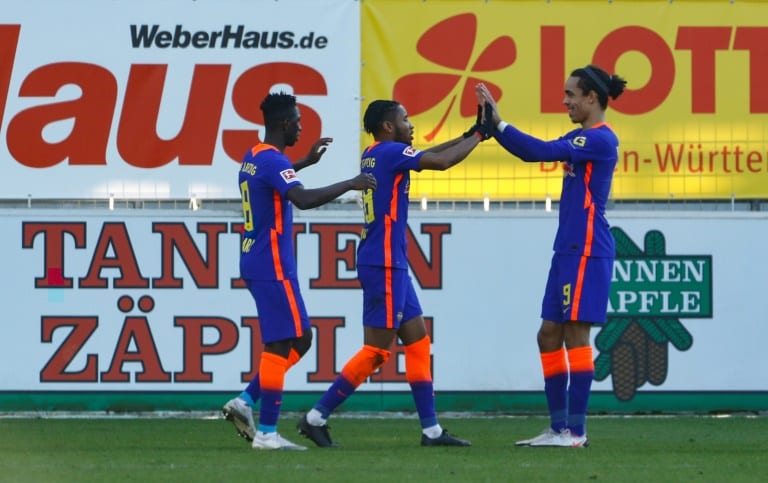 Berlin (AFP) – RB Leipzig climbed top of the Bundesliga on Saturday with a 3-0 romp at Freiburg to replace previous leaders Bayern Munich, who later host Dortmund in Germany’s ‘Klassiker’.

Christopher Nkunku, Alexander Sorloth and Emil Forsberg scored the goals in Freiburg which lifted Leipzig one point ahead of Bayern, who are at home to Dortmund (1730GMT).

“Anything is possible,” he replied when asked if Leipzig can stop Bayern winning a ninth straight league title this season.

Leipzig impressed in their final tune-up before facing Liverpool in Budapest next Wednesday in the last 16 of the Champions League having lost the first leg 2-0.

Leipzig took the lead at Freiburg after a first-half blunder by home goalkeeper Florian Mueller.

His loose pass from the back was snapped up by Leipzig striker Yussuf Poulsen, who squared for French winger Nkunku to tap home four minutes before the break.

Sorloth continued his great form and midway through the second half he converted Nkunku’s assist.

The Norwegian, who scored the last-gasp winner over Moenchengladbach a week ago, then set up Forsberg who banged in Leipzig’s third goal 11 minutes from time.

Third-placed Wolfsburg are now eight points adrift of Leipzig having stumbled to a 2-1 defeat at mid-table Hoffenheim whose striker Andrej Kramaric scored the hosts’ winning goal just before half-time.

Eintracht Frankfurt stay fourth after Filip Kostic equalised for the home team in a 1-1 draw against Stuttgart.

A late goal by Leverkusen striker Patrik Schick sealed their 1-0 win at Moenchengladbach, who drop to 10th as their miserable run continues.

Gladbach have now lost all fives games since it was announced head coach Marco Rose will take charge of Dortmund next season.

“The fun and joy is missing in our football,” admitted Gladbach midfielder Hannes Wolf.

The away win eases the pressure on Leverkusen coach Peter Bosz. His fifth-placed side had failed to win any of their five previous games in all competitions.

It was Hertha’s first victory in 10 games which pulled them up to 14th and away from the relegation fight.

Coach Pal Dardai described the win as a “magic moment” as he enjoyed his first victory since replacing Bruno Labbadia at Hertha in January.

The Article Leipzig knock Bayern from top after romp at Freiburg First Appeared ON
: https://arsenalweb.co.uk

The Article Leipzig knock Bayern from top after romp at Freiburg First Appeared ON
: https://gqcentral.co.uk